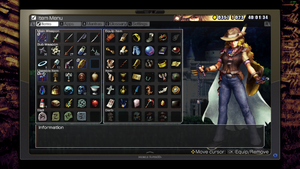 The item screen showing all weapons

Weapons are your primary tools for beating up baddies and surviving the ruins. They are all designed for close-range combat and have differing strength, speed, and angles of attack. Weapons can be selected from the Menu or switched on the go using the Switch Weapon keys, and your current equipped weapon is displayed as the center icon in the upper-right corner of the screen.

Different attributes of main weapons can be enhanced by the Gauntlet and Spaulder, as well as by certain app combinations.